How modern binaries protect against attacks and how these protections are bypassed.

Together, these techniques make exploitation much more difficult for attackers when exploitable bugs (such as buffer overflows) are found. However, these protection techniques are not undefeatable. And attackers have found creative ways to bypass the constraints of these methods.

Today, let’s dive into the techniques used to protect modern binaries and how attackers can potentially bypass them.

We’ve delved into some exploitation techniques such as buffer overflow, buffer overread, and format string attacks. These memory corruption bugs can lead to attackers injecting and executing their own code.

These attacks rely on parts of the memory being both writable and executable. (So that the attacker can write their code into the memory region, and subsequently execute that code.) If there are no memory regions that satisfy these two conditions, this type of attack would fail. 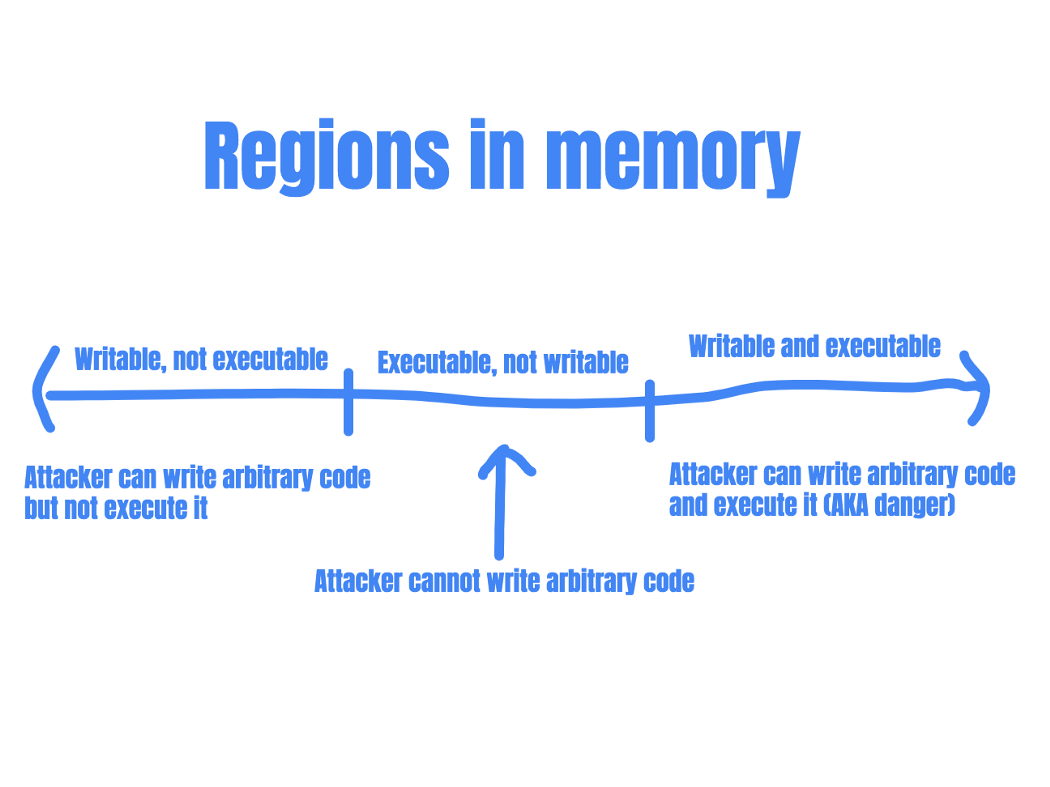 Thus, data execution prevention was introduced. DEP marks certain areas in memory (typically the user-writable parts) as non-executable so that attempts to execute code in these regions would cause an exception.

This is a very useful protection technique as it essentially prevents attackers from executing injected shellcode. (In the context of binary exploitation, shellcode refers to instructions that are injected and then executed by attackers.)

However, a system with DEP implemented is not hacker-proof. A technique that is commonly used to bypass the limitations set forth by DEP is Return Oriented Programming (ROP).

Return Oriented Programming is an exploit technique that allows attackers to execute code regardless of DEP.

In ROP, the entry point of the attack is still some form of memory corruption: the attacker would need a way to hijack the program control flow. The attacker can then continue to redirect the program flow to use snippets of code already in the codebase (called “gadgets”). Chaining these gadgets together, the attacker can pretty much replicate the effects of custom shellcode. 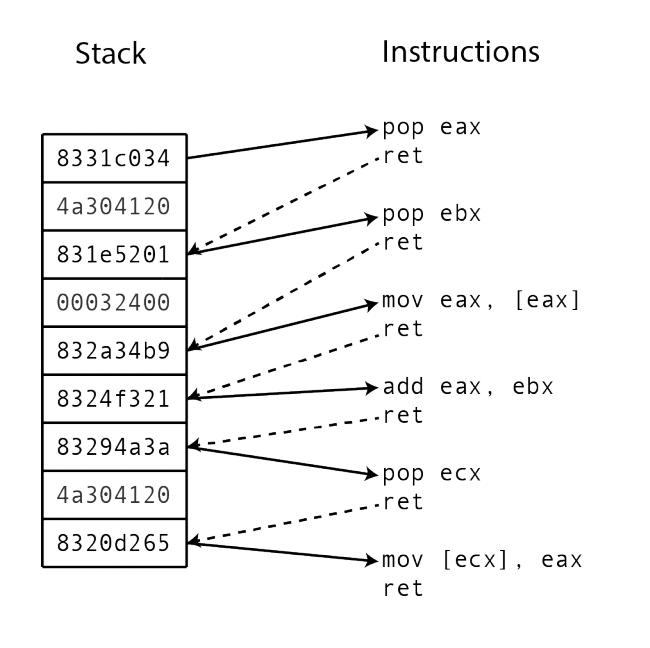 Each gadget executes a small part of the computation desired by the attacker, such as adding to a register or writing it into a register.

And this is why ROP works: the attacker is not writing any executable code into memory, just reusing code that is already being used by the program! DEP makes exploitation harder, as gadgets take time to find and chain, but it is almost always possible to achieve the same results as custom shellcode.

However, after finding a memory corruption bug, it is not always possible to place a complete ROP chain on the stack like in the above image. Sometimes an attacker is only able to overwrite a single address on the stack. Does this mean that the ROP chain is no longer possible?

In this case, attackers can utilize a technique called a “stack pivot”. During a stack pivot attack, the attacker uses the one gadget that she can control to move the stack pointer to a different location.

For example, the attacker can create a fake stack at a location that she can write to, and store the ROP chain there (place the list of addresses of gadgets there). Then, she can utilize the overwrite on the real stack to point to a gadget that moves the stack pointer to the fake stack, kick-starting the ROP chain.

Ret2libc is another technique that attackers can use to bypass DEP.

Instead of placing custom shellcode in memory or finding and chaining gadgets, attackers can simply make use of functions already being used by the program.

For example, the C code system(“/bin/sh”) can be used to spawn an interactive shell. This is essentially a call to the C system() function with a single argument ”/bin/sh”. This means that if the attacker can place the argument ”/bin/sh” on the stack, and redirect program flow to the address of system() using a memory corruption technique, she can get arbitrary code execution.

Protection bypass techniques like ROP and Ret2libc means that DEP by itself is not enough to prevent hackers from building exploits. This is why the Address Space Layout Randomization (ASLR) is used.

Protecting the system by randomizing addresses of important memory segments

ASLR randomizes the address ranges for important memory segments such as the stack, the heap, program code and shared libraries such as libc. This means that memory segments are no longer static, and changes every time the program runs.

By randomizing the address layout between program runs, ASLR protects against attacks that rely on knowledge of where usable code is located, such as ROP and Ret2libc. Because even if a bug allows an attacker to control the program’s instruction pointer, the attacker would have no idea where to redirect the program flow.

For example, let’s say as an attacker you are trying to launch a Ret2libc attack. To do that, you’ll need to know where the address for system() is. 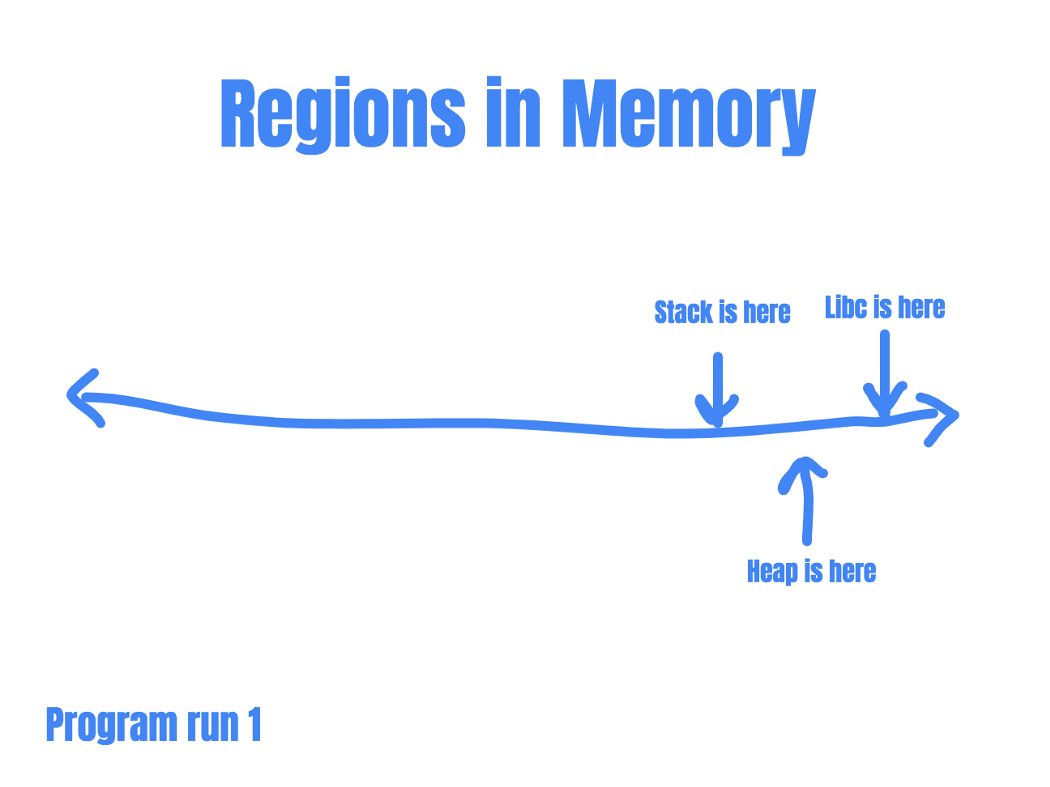 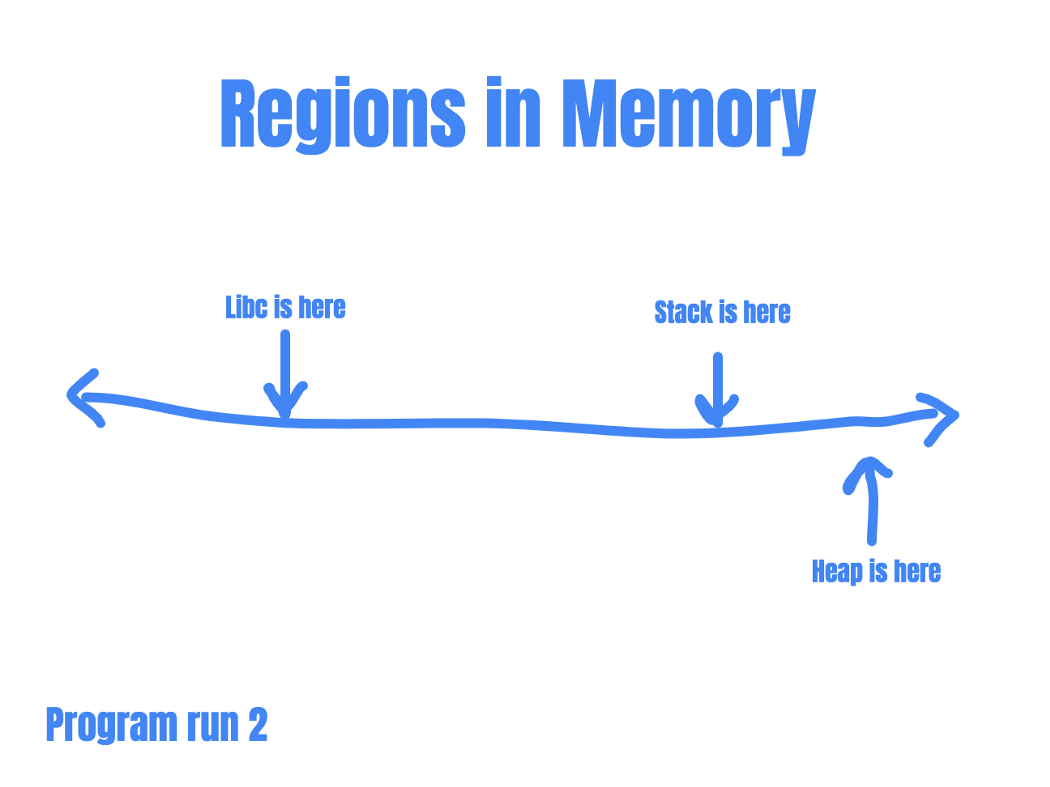 Sometimes, not all segments in memory are randomized. If even a single executable code segment is not randomized across program runs, an attacker can utilize that segment to launch a ROP attack or use that segment to redirect to other functions.

It becomes more difficult for attackers to find ROP gadgets since the code that they can work with becomes restricted, but it is still possible to achieve a lot of things, including arbitrary code execution.

Return to PLT & GOT

One of the ways places that attackers can redirect program flow to another function is through the Procedural Linkage Table (PLT) or the Global Offset Table (GOT). The PLT and GOT are used to point to dynamically resolved functions (more on this in later posts). When these sections are loaded at a fixed address, hackers can utilize these sections to obtain the location of the desired functions.

An attacker might also be able to build exploits by leaking the locations of important code in memory. If an attacker can leak the address of an important function (such as printf()), she can use that location to deduce the address of more useful functions (such as system()). 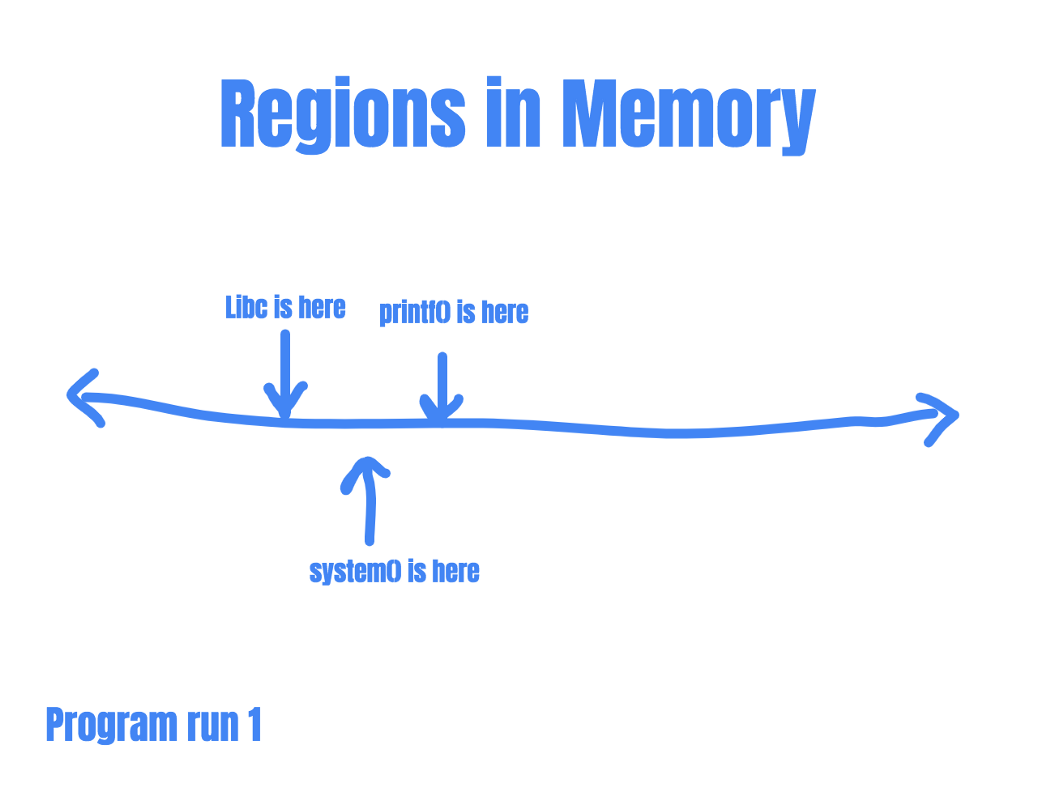 This is because even in ASLR, not every memory address would be randomized, and each segment of memory will still have a predictable internal format. In shared libraries, for example, only the base location of the memory segment would be randomized. The offset of a particular function from the base address remains constant. 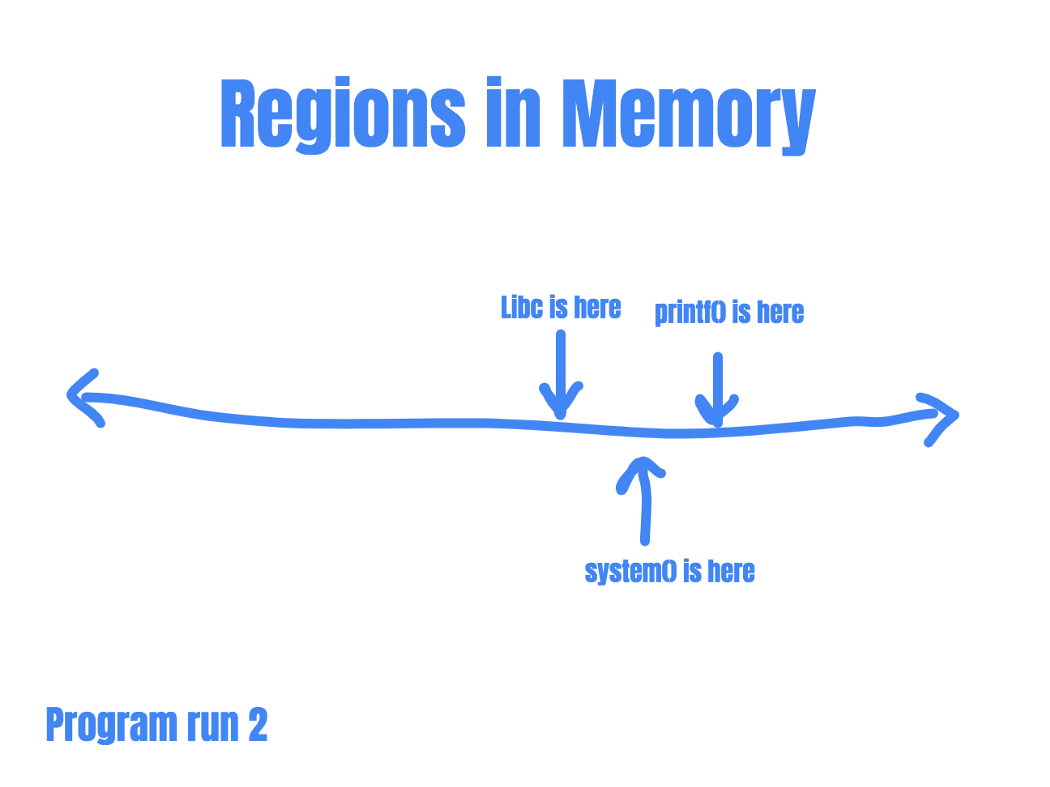 So if an attacker can know where printf() is, she knows where system() is.

These memory address leaks can usually be achieved by leveraging another vulnerability, such as a buffer overread or a format string vulnerability.

ASLR does not randomize the entire base address of a memory segment, usually just the higher bytes.

As mentioned above, ASLR does not randomize the entire base address of a memory segment, usually just the higher bytes. So it might also be possible to simply brute force base addresses. However, this is usually a waste of time unless the ASLR implementation is weak and has low entropy.

Stack canaries are another way that programs protect against binary exploits. They are randomized values that change every time a program runs. When placed in strategic locations (after a buffer or before function returns), they can be used to detect corruption of the stack.

Unlike the above mitigation techniques, stack canaries have the ability to detect attacks. Programs achieve this by checking canary values before a function returns, and stop execution if the canary value is incorrect.

Since it’s virtually impossible to guess a random 64-bit value, attackers would not be able to craft an exploit without knowing the canary value.

However, if an attacker can read the canary value during program execution, she can plant it in her payload and send it back to the program. For this to happen, the attacker would need an arbitrary or limited memory read, usually through a buffer overread or format string vulnerability.

Since the canary is determined when the program starts execution, any child process of the program will usually have the same canary value.

This means that if the memory corruption bug can be used to overwrite canary values sent to the child processes, it becomes possible to brute-force the canary based on which child processes crash!

Using the above two techniques, attackers can acquire the canary value, place it into the payload and successfully redirect program flow or corrupt important program data.

These binary exploitation mitigations are becoming the default in modern programs. In order to successfully exploit a bug, attackers must not only understand the techniques used for memory corruption but must also have the ability to chain vulnerabilities together to bypass these mitigations.

Every additional layer of protection makes exploitation more difficult and adds security to the program. However, these mitigations do not make exploitation impossible. The most reliable way to prevent attacks is still to program safely and eliminate entry point vulnerabilities.

Thanks for reading! I realized that this post is dense and somewhat (very) theoretical, but in the future, we are going to dive into what it would look like to exploit and protect against these issues in the wild. Stay tuned!