And how I got your company secrets.

Now that we got the basics of SSRFs down, let’s learn to exploit them! If you aren’t familiar with SSRFs or need a refresher, here’s the first part of the series about SSRF.

So what exactly can a hacker do with an SSRF vulnerability? Well, that usually depends on the internal services found on the network. Today, we’ll talk about a few common ways to exploit the vulnerability once you’ve found one. Let’s dive right in!

I found an SSRF! What now?

SSRF vulnerabilities can be used to:

First, SSRFs can be used to scan the network for other reachable machines. This is done by feeding the vulnerable endpoint with a range of internal IP addresses and see if the server responds differently for each address. Using the differences in server behavior, we can gather info about the network structure.

For example, when you request:

The server responds with:

And when you request:

The server responds with:

Provide the vulnerable endpoint with different ports of identified internal machines and determine if there is a difference in server behavior between ports. It’s the same process as scanning for hosts, except this time, you’re switching out port numbers. (Port numbers range from 0 to 65535.)

We can deduce that port 80 is open on the server, while port 11 is not.

Amazon Elastic Compute Cloud (Amazon EC2) is a service that allows businesses to run applications in the public cloud. It has a service called ”Instance Metadata”. This enables EC2 instances to access an API that returns data about the instance itself (on the address 169.254.169.254). An instance metadata API service similar to that of EC2’s is also available on Google Cloud. These API endpoints are accessible by default unless they are specifically blocked or disabled by network admins. The information these services reveal is often extremely sensitive and could potentially allow attackers to escalate SSRFs to serious info leaks and RCE (Remote Code Execution).

If a company is hosting its infrastructure on Amazon EC2, you can query various instance metadata about the host using the endpoints at

These endpoints reveal information such as API keys, AWS S3 tokens, and passwords. Here is the complete documentation from Amazon.

Here are a few especially useful ones to go after first:

If the company uses Google Cloud, you could try to query Google Instance Metadata API instead.

But this protection can be easily bypassed because most endpoints accessible through APIv1 can be accessed via the API v1beta1 endpoints instead. And API v1beta1 does not have the same header requirements. Here’s the full documentation of the API from Google.

Here are a few critical pieces of information to go after first:

Amazon and Google aren’t the only web services that provide metadata APIs. However, these two have quite a large market share so chances are the company that you are testing is on one of these platforms. If not, here’s a list of other cloud metadata services and things you can try.

Using What You’ve Got

Now using what you’ve found by scanning the network, identifying services and pulling instance metadata, you can try to pull these off:

Some internal services might only control access based on IP addresses or internal headers. It might be possible to bypass access controls to sensitive functionalities just by sending the request from a trusted machine.

If you’re able to find credentials using the SSRF, you can then use those credentials to access confidential information stored on the network. For example, if you were able to find AWS S3 keys, go through the company’s private S3 buckets and see if you have access to those.

You can use the info you gathered to turn SSRF into RCE. For example, if you found admin credentials that give you write privileges, try uploading a shell. Or if you found an unsecured admin panel, are there any features that allow the execution of scripts? Better yet, maybe you can log in as root?

Blind SSRFs are SSRFs where you don’t get a response or error message back from the target server.

For example, when you feed the following request results in an HTTP status code of 200 (Status code for “OK”).

While the following request results in an HTTP status code of 500 (Status code for “Internal Server Error”).

If the server is not returning any useful information in the form of status codes, all is not lost. You might still be able to figure out the network structure by examining how long the server is taking to respond to your request.

Check out this graph published by @jobert on the Hackerone Blog. It provides a good overview of how a network would behave. 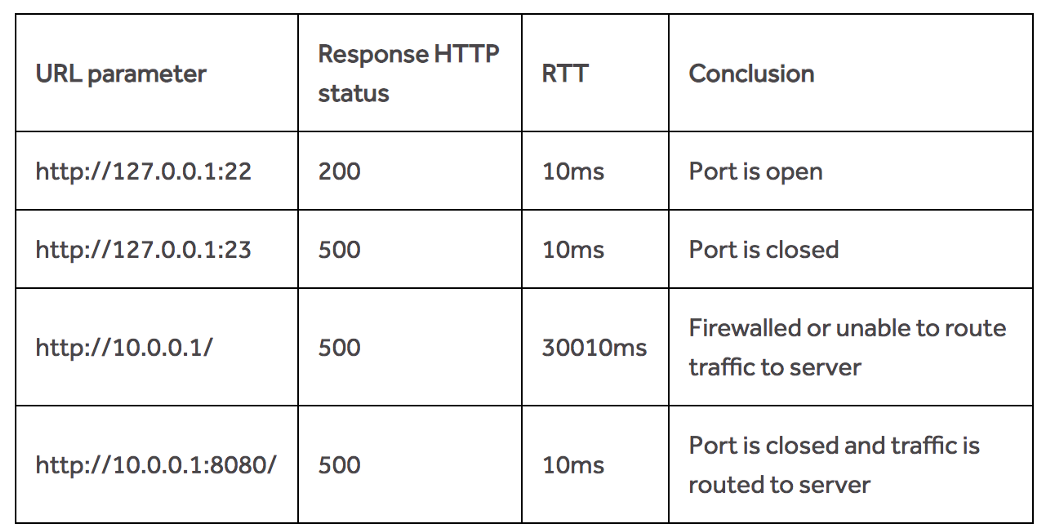 When performing any kind of network or port scanning, it is important to remember that vulnerable machines behave differently, and the key is to look for differences in behavior instead of the specific signatures described above.

The target machine might also leak sensitive information in outbound requests, such as internal IPs, headers, and version numbers of the software used. Try to provide the vulnerable endpoint with the address of a server you own and see what you can extract from the incoming request!

SSRF is a vulnerability that is full of potential. Here’s a link to the SSRF Bible. It discusses many more methods of exploiting SSRFs. In future posts, we will discuss real-life examples of how master hackers have utilized SSRF to own company networks!

Next time, we’ll talk about how to bypass common SSRF protection mechanisms used by companies.